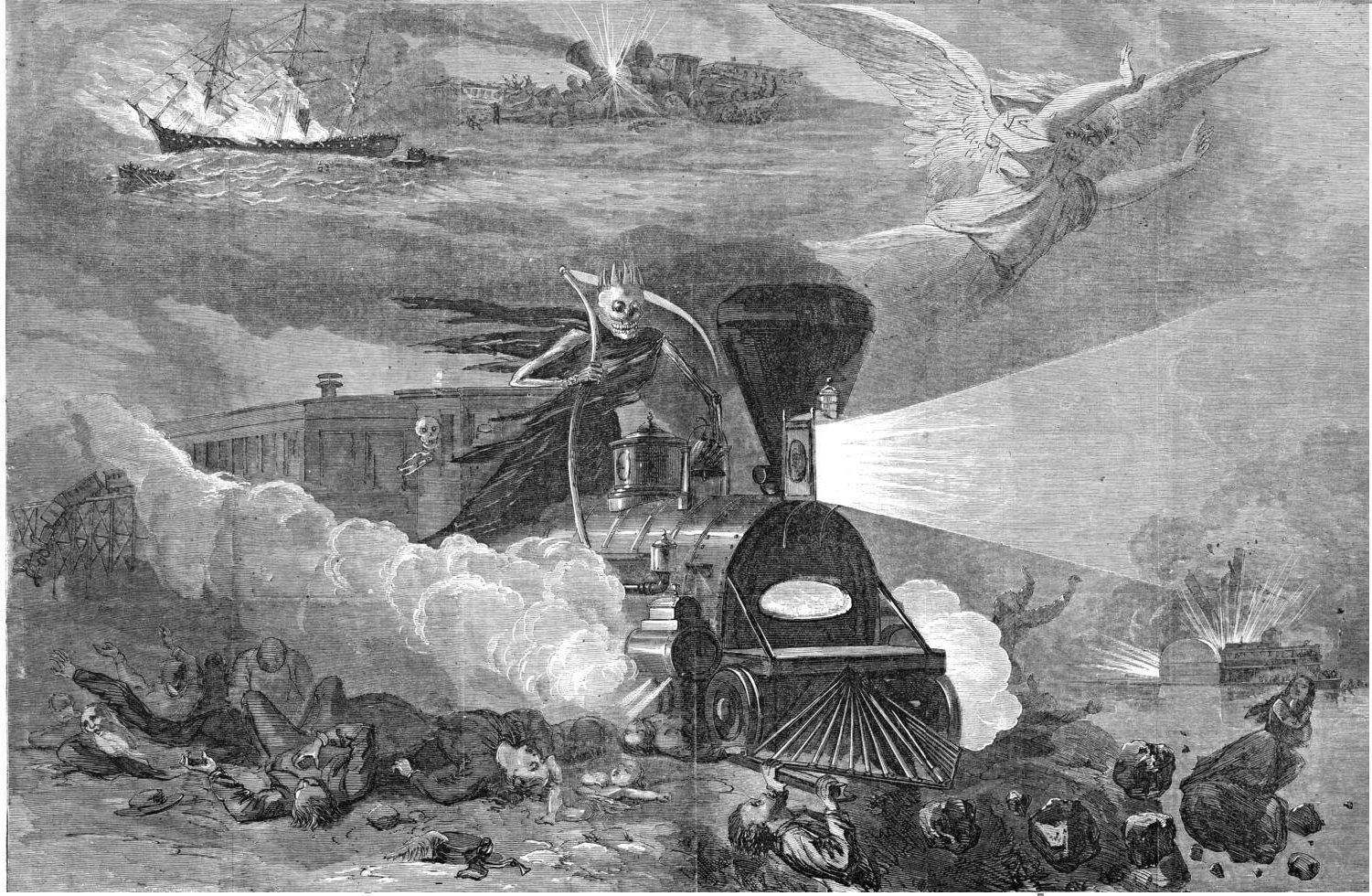 “The Horrors of Travel”

Some of the scariest works I’ve read or seen didn’t come from a work of horror fiction, but from books about and accounts of historical disasters. The description of the sea suddenly overtaking an already flooded Galveston Island during the hurricane of 1900, as written in Isaac’s Storm, is as chilling as it is succinct. There are parts of Stewart O’Nan’s The Circus Fire that are at least as terrifying as anything in the most affecting horror novels I’ve ever read.

While the above artwork from an issue of Harper’s Weekly, printed in September of 1865, isn’t supremely frightening, it is undoubtedly macabre. “[G]raphic, but by no means extravagant,” is how Harper’s described its illustration. The nonfiction book The Angola Horror–a recounting of the 1867 train wreck that occurred in Angola, New York–introduced me to “The Horrors of Travel.” The short article that accompanies the picture mentions the 1865 explosion of the steamship Sultana, and the drawing appears to reference it in the lower right hand corner.

In the upper left corner is a burning ship that might not to be a reference to anything specific, but the article is focused on accidents that occurred in 1865, even if it only mentions one by name. There were two other major maritime accidents that occurred in 1865: the Brother Jonathan sank off the coast of California, killing 225 people (92% of its passengers and crew) in July , and in August the SS Pewabic collided with her sister ship and took at least 100 people down with it in Lake Huron. The Sultana disaster was the deadliest maritime accident1 in world history to that point, and would remain so for at least half a century (depending on how one classifies the Halifax explosion).  It remains the deadliest maritime accident in United States History. The Brother Jonathan sinking was the tenth worst in U.S. history, and the Pewabic disaster was the fourth worst to occur in the Great Lakes. From April to August, a country that was barely exiting the Civil War witnessed three major marine shipwrecks occur along the West Coast, the Great Lakes, and in the Mississippi River, near Tennessee. So while there was no major incident involving a burning boat in 1865, it’s understandable that Harper’s would want to include one more dramatic image of a foundering vessel in this illustration, driving home the point that these incidents were taking place all over the country in a relatively compact time frame.

The train wreck references are a little harder to explain, given the article’s focus on 1865. The year saw no major, deadly railway accidents, although the head-on collision from the Shohola incident from a year prior might account for the crash depicted in top center of this illustration. The associated article makes no mention of a specific train disaster. Even without a more recent, major wreck to serve as inspiration, however, the specter of railway disasters–a relatively new and seemingly grislier spectacle at the time–still loomed so large that this illustration makes it a centerpiece steered by Death itself.