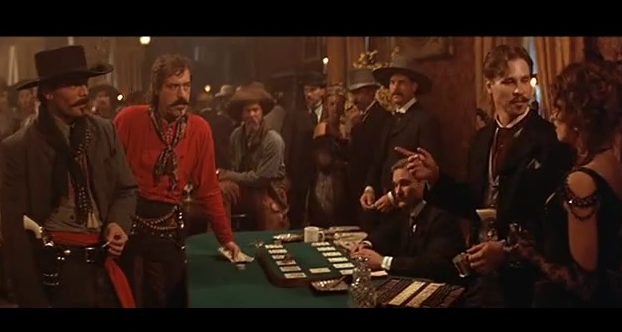 Published by Johnny Compton on June 22, 2017
Some rivalries are built and strengthened by the opponents being perfect opposites, but others are memorable because the enemies reflect each other a little too closely for comfort. Doc Holliday spells it out for us during the famous first encounter he has with Johnny Ringo in Tombstone; here is a man who reminds him of himself, and for that reason alone, a drunken Holliday decides to despise him. When Ringo exhibits a knowledge of Latin that matches Holliday’s, Doc declares, “Now I really hate him.”

The men are very similar and it shows up on screen. Sometimes we’re simply told that two characters are or were similar in some fashion, but we’re given scant evidence of it. In Carlito’s Way, for example, one character scolds the older Carlito that brash, upstart Bennie Blanco (from the Bronx) is just a younger version of Carlito, to which the more seasoned gangster responds, “Never me.” It’s an example of how sometimes telling isn’t always necessarily worse than showing (a flashback would be cumbersome and disrupt the movie’s momentum), but it’s still something that we never get to visualize. Not so with Tombstone. The confrontation in the video above efficiently illustrates how Ringo and Holliday mirror one another. It also shows us where they differ.

One reason why Val Kilmer is rightly praised for his magnetic turn as Holliday is that he makes a murderous, borderline-psychopathic asshole likable. He almost certainly cheats at cards (“twelve hands in a row”? Ike’s right, nobody’s that lucky), taunts you for losing your money to his cheating ways, baits you into reacting and shivs you for it, nonchalantly robs the place on his way out, then skips town with his lady (who prepared for their getaway ahead of time). He’s a scoundrel at best, a bloodthirsty, opportunistic murderer at worst. “Bloodthirsty murderer” is also an apt description of Michael Biehn’s Johnny Ringo. But Doc is also charming and witty, and he’s friends with the hero, so we like him. He’s also more confident, so he doesn’t have to posture aggressively the same way Ringo does (you can take “posture aggressively” literally in the scene above, where Ringo stands ready to draw, and Holliday remains calm with a drink in his hand).

Doc is a casual gardener of trouble, sowing it and inviting it to grow just to give himself something to do. Johnny Ringo is a compulsive carpenter of trouble. If he’s not building it to his exact specifications, he feels lost.

Holliday also has a twisted sense of humor, whereas Ringo has none at all. Kilmer’s Holliday appears to see life and death as a bit of a joke. He knows he’s quick and great with a gun, and that his skills still won’t help him combat the brutal illness that’s consuming his life day by day. So he’s carefree about life-and-death matters in a way other men aren’t. He’s willing to “play for blood” in a shootout with a thoroughly drunken Ringo, but he doesn’t care about playing fair; he already has his gun drawn and hidden behind his back. Not only does he cheat at cards, he cheats at duels when he sees fit. Notice Doc’s slight grin as he tries to lure Ringo into a rash decision and hasty death.

Johnny Ringo lacks Holliday’s self-awareness. When Holliday says that a man like Ringo “has got a great big hole right in the middle of him,” he’s speaking of himself as well. Granted, we spend more time with Holliday, but we get enough time with Ringo to understand that he doesn’t understand himself nearly as well as Holliday does, doesn’t grasp what makes him so miserable and prone to violence. Holliday, conversely, knows and speaks of his own hypocrisy, he knows that Kate is using him and may be “the Antichrist,” and, in a heartbreaking, wonderful moment, he knows that he frankly hasn’t led a life that’s won him many friends.

Ringo is equally loyal to his few friends, even though he isn’t emotionally capable of articulating it even in the simple way Doc does. In the scene where he calls for the blood and souls of the Earps, he’s drunk for the only time in the movie. This is on the heels of his friends in the Cowboys gang dying during the Gunfight at the O.K. Corral. At no other time in the film is Johnny up for the Cowboys’ drunken debauchery. In fact, Ringo abstains from any vices besides killing. He’ll shoot a priest dead, to the shock of his fellow Cowboys, but he never chases women, doesn’t play cards and almost never drinks. Only when his friends have been killed–when he wasn’t there to use his expertise to help them–does Ringo seek solace in liquor.

The “hole” in Ringo’s life isn’t that much bigger than Holliday’s, Doc just realizes something is missing and therefore does something about it. While Ringo “can never kill enough, or steal enough, or inflict enough pain” to fill that space, Doc can at least partially quell his emptiness through booze, gambling, women, and an undying devotion to his one true friend. Ringo, intelligent but ignorant of himself and utterly joyless, avoids pleasure and seeks only death, but that can’t come close to evening him out.

Ringo is also too reliant on having others see him as a man who’s too dangerous to be stood up to. Even Wyatt, brave as he is, conceded to Doc that he couldn’t beat Ringo in a gunfight, which is what prompted Doc to intervene. When Doc–a man who does not see Ringo as a Reaper, but just as a dead man walking, same as himself–shows up and says he wants to finish their game of “playing for blood,” Ringo says he was only joking.

“I wasn’t,” Doc says. And Ringo’s face turns from stone to this…

He’s afraid and confused. While Ringo chases death and wants “revenge [for] being born,” he doesn’t really want to die, and he really doesn’t want to be in this situation that he cannot control. Holliday, meanwhile, sports the same relaxed grin prior to their duel that he was wearing when telling Wyatt he was “rolling” with success, or observing that Kate wasn’t wearing a bustle, or when he proudly proclaimed to Ringo in their first meeting that he is in his prime.

When Holliday lands the fatal shot in their duel, he goads Ringo into getting a shot off of his own, and you get the sense that he’s sincere. Doc’s illness has condemned him to an early grave regardless of how he lives, and he’s well aware of this. When he senses his time is coming, he’s only distressed at the thought of Wyatt watching him pass. When Wyatt leaves the room, Holliday makes a final, calm comment observing that he’s dying with his boots off, and then he dies without much stress.

In the end, the result of this rivalry–predictable as it may be for a crowd-pleasing Western–is foreshadowed by that first confrontation. There is Doc Holliday, the casual gardener, and Johnny Ringo, the compulsive builder. The cool improviser, and the controller. Two men with similar talents and a similar blood lust, but a few crucial differences. Ringo instigates trouble because he must be in control–or at least feel that he is in control–and must keep up appearances as the baddest man in the room. He needs others to see him a certain way. Doc invites trouble and simply takes things as they come, and doesn’t much care what most others think of him. Ringo shows off his (probably rehearsed) gun-twirling tricks for the crowd to show everyone he’s a bad, bad man, and Doc makes a joke of it, because he’s savvy and wants to deescalate the situation for the sake of his friends, but also because he doesn’t care if anyone else thinks he’s a bad, bad man. He knows who and what he is.

And when the insecure man who must control trouble is confronted by an uncontrollable variable he wasn’t prepared for–Doc showing up for a duel before Wyatt could arrive–well, his fear is so apparent that his rival can see the ghost in him, and truthfully tells him that he looks as though someone’s walked over his soon-to-be-dug grave.