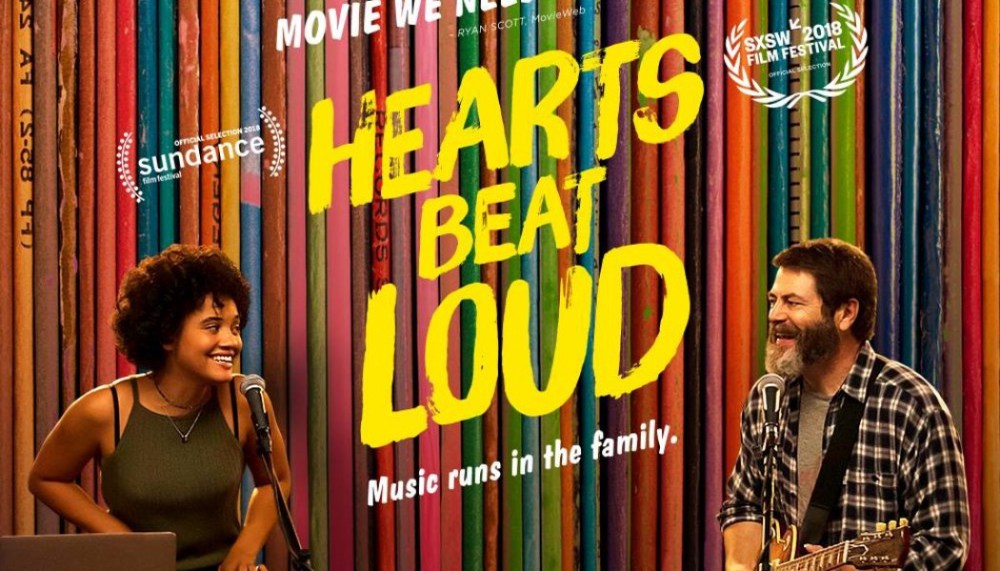 As long as it’s executed at least fairly well, I’m a sucker for a sweet, sentimental story, or anything with just the right amount of too much melodrama. I have been for just about all of my adult life, I think. Asian action flicks, ghost stories and small, well-acted pictures with big, warm hearts; those all probably have the shortest distance to travel to get on my good side.

Needless to say, Hearts Beat Loud worked for me. You cast Kiersey Clemons, Nick Offerman, Toni Collette, Ted Danson and Sasha Lane all in the same movie and make them persistently pleasant people, you’re not going to give me much to dislike. Oh, and there’s a welcoming looking bar that serves as the setting for some important moments. I can’t resist a welcoming bars as well, fictional or otherwise.

Hearts Beat Loud is named after the song that father and widower Frank (Offerman) and daughter Sam (Clemons) create together on a bit of a whim, which sort-of takes off as a small indy-hit, which may make the stakes of this movie sound bigger than they actually turn out to be. The movie is really about Frank and Sam figuring out what the next stages of their lives will look like as they learn to move on and let certain things go. Frank has more responsibilities, being older and having to care more for his aging, occasionally shoplifting / troublemaking mother. This puts him at odds with what his heart wants, which is to regain some semblance of his music-making youth. The closest thing he has to that currently is his record store in Red Hook, which is closing shop soon as business has slowed to a crawl. Fortunately for him, at least for a moment, the song he makes with Sam gives him another outlet for the fantasy he isn’t ready to relinquish just yet.

Sam, meanwhile, has fewer responsibilities but a bigger decision for her long term future to make. She’s slated to move across the country for college where she’ll be on her  way to becoming a doctor. That would necessitate leaving behind not just her father and grandmother, but her perfectly supportive girlfriend Rose (Sasha Lane). Now, I’m old enough to know that her decision shouldn’t be all that stressful, but not so old that I don’t remember how many (most?) of us can be wired to be stressed by such decisions at that age, in part because of the expectations of the world surrounding us. It blows my mind sometimes to think of how people can act as though 18 or 19 or even 22 is a cutoff point for choosing the best possible path for your long-term future. Choose now, love or school, and whichever you leave behind will surely be lost forever and ever. It’s one thing when the younger generations see it that way; they’re the ones going through it. But when those of us who’ve been there before still put that pressure on the youth, what’s our excuse?

Anyway, Sam is juxtaposed as the more level-headed, responsible party compared to Frank, who is the dreamer who handles things less maturely. Of course, he’s facing a possible mid-life crisis; the “loss” of his daughter to her own life (how dreadful), the loss of his business, and really the loss of any fresh possibilities for his shortening future, at least so far as he can see. And I feel you on that one, Frank, I do. But trying to get your daughter to dump her doctoral pursuits to sign a record deal with you based on a minor indy hit you both stumbled into? In this current, extra-fickle music climate? When you’re a former musician yourself and surely know firsthand about Q-Tip’s Record Industry Rule Number 4,080 (which, should probably be Rule Number 1)? Come on, man. Sam’s dead right when she tells you that you need to grow up, and it’s not related to you wanting to make music, but to you wanting to make bad decisions for your own kid.

Back to the music-making, if there’s a standout flaw to Hearts Beat Loud, it’s that the music itself doesn’t really stand out. It’s not bad. The song that the movie is named for is the best piece, which makes sense, but two more that are featured during a grand finale performance during the climax aren’t as good as the moment around them. Sam’s ode to Rose in particular really doesn’t feel worthy of the acting between Clemons and Lane. And while “Hearts Beat Loud” struck me as a solid tune during the film, I’d forgotten the rhythm and most of the words less than an hour later. For a movie in which catchy, trending songs made by the characters plays a key part in the proceedings, the songs themselves are too forgettable.

My only other disappointment regarding Hearts Beat Loud is that I missed it while it was in theaters. Some theater experiences, for me, are ideal because I’m watching something that is a giant spectacle. A movie with incredible effects or stunt work, or both. Other movies are theatrical must-sees because I know the communal experience will heighten my enjoyment of the film. I’ll never forget watching the first Paranormal Activity with a lively crowd that screamed and laughed and screamed again at all of the right moments. Then there are other types of theater experiences that I adore. The ones where I might have a whole row at the Bijou all to myself, and I’ve ordered a glass of Chardonnay, and I’ve got a couple of hours to myself, and I’m just in the mood to smile for a while. As much as I enjoyed Hearts Beat Loud, I would have liked it that much more on the big screen, in that environment. And the worst thing is that I knew from the first trailer that it would be perfect viewing for that setting, and I still didn’t make the time. If nothing else, it has reminded me not to miss more of those opportunities if I can help it.

Final Grade:  A lovely little film that I’ll probably watch again before the year’s out. Again, I’m a sucker for this sort of thing.