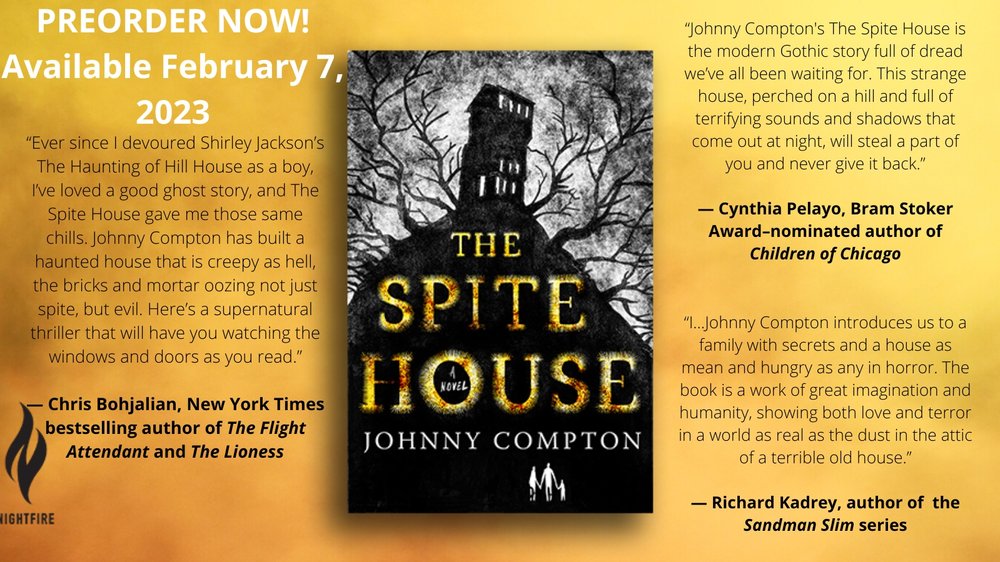 About THE SPITE HOUSE:

The Babadook meets A Headful of Ghosts in Texas Hill Country.

Eric Ross is on the run from a mysterious past with his two daughters in tow. Having left his wife, his house, his whole life behind in Maryland, he’s desperate for money–it’s not easy to find steady, safe work when you can’t provide references, you can’t stay in one place for long, and you’re paranoid that your past is creeping back up on you.

When he comes across the strange ad for the Masson House in Degener, Texas, Eric thinks they may have finally caught a lucky break. The Masson property, notorious for being one of the most haunted places in Texas, needs a caretaker of sorts. The owner is looking for proof of paranormal activity. All they need to do is stay in the house and keep a detailed record of everything that happens there. Provided the house’s horrors don’t drive them all mad, like the caretakers before them.

The job calls to Eric, not just because there’s a huge payout if they can make it through, but because he wants to explore the secrets of the spite house. If it is indeed haunted, maybe it’ll help him understand the uncanny power that clings to his family, driving them from town to town, making them afraid to stop running.

“Ever since I devoured Shirley Jackson’s The Haunting of Hill House as a boy, I’ve loved a good ghost story, and The Spite House gave me those same chills. Johnny Compton has built a haunted house that is creepy as hell, the bricks and mortar oozing not just spite, but evil. Here’s a supernatural thriller that will have you watching the windows and doors as you read.” —Chris Bohjalian, New York Times bestselling author of The Flight Attendant and The Lioness

“Johnny Compton’s The Spite House is the modern Gothic story full of dread we’ve all been waiting for. This strange house, perched on a hill and full of terrifying sounds and shadows that come out at night, will steal a part of you and never give it back.”—Cynthia Pelayo, Bram Stoker Award–nominated author of Children of Chicago

“In The Spite House, Johnny Compton introduces us to a family with secrets and a house as mean and hungry as any in horror. The book is a work of great imagination and humanity, showing both love and terror in a world as real as the dust in the attic of a terrible old house.”—Richard Kadrey, author of King Bullet

“Rare is the book that leaves me so wordless with astonishment at its beauty. The Spite House is an aching, heartbroken meditation on what haunts us and the sins we inherit from those who came before us.”—Cassandra Khaw, author of Nothing But Blackened Teeth

“The Spite House is high-grade horror. Johnny Compton masterfully conjures dread and suspense in this stunning haunted house tale. Truly a book that will leave you fearful of the spite in your own heart.”—Celso Hurtado, author of The Ghost Tracks

“The Spite House commences with an enigma that quickly morphs into a mystery, which ultimately leaves us with a riddle that’s perplexed humanity since the dawn of time—all the while rubbing our nerves raw with dread. Johnny Compton propels us through this creepy maze with the assurance of one who has likely stared into the abyss himself.”—John Harrison, author of Passing Through Veils and writer/director of Tales from the Darkside, The Movie; Frank Herbert’s Dune miniseries; and Clive Barker’s Book of Blood

“Johnny Compton is the new architect of terror. His novel The Spite House joins Anne Rivers Siddons’ The House Next Door, Robert Maracso’s Burnt Offerings, and Michael McDowell’s The Elementals, reconfiguring the blueprints of a haunted house story in order to fashion something fresh and frightening.”—Clay McLeod Chapman, author of Ghost Eaters

“If you didn’t know what a ‘spite house’ was before, you will lie awake thinking about them after reading this. The Spite House is a haunting, multilayered gothic novel with a refreshing twist on ghosts that gives you chills on every page, and just as much family heart. Compton’s The Spite House sets a new, and a very high bar, for haunted-house horror.”—Diana Rodriguez Wallach, author of Small Town Monsters