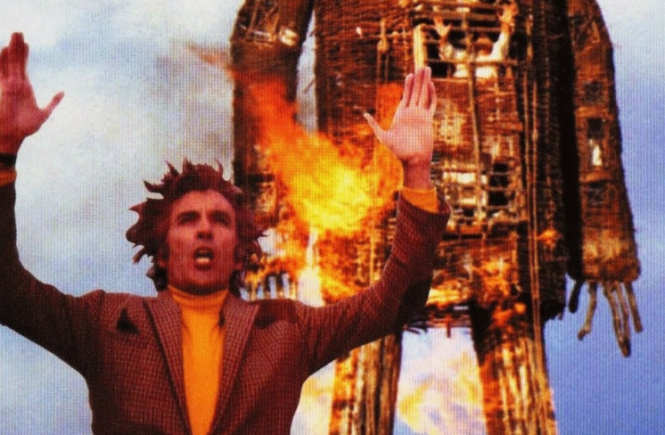 A couple of days ago, we saw the anniversary of 1988’s The Blob, (which is the subject of a fine write-up over at BMD), a genuinely good and justifiable remake if there ever was one. On the other end of the remake scale is, of course, the disaster that is the 2006 version of The Wicker Man. Fortunately, today is the anniversary of the outstanding original from 1973.

If any film can make a case for being spoiler-proof, it’s The Wicker Man. The title and virtually all of the associated cover / poster art gives away a pretty major, shocking moment that occurs late in the film. But The Wicker Man is as much about the journey as it is the climax, and having a sense of where things are headed, in this case, just adds to the dread. It being a horror story, you already enter the film aware of the 50/50 chance that we’ll arrive at a conclusion so dire and certain it seems predestined. Horror is soaked, perhaps to its detriment, with stories where the ostensible right and sensible thing to do turns out to be a fatal mistake, or a useless act in a situation that was hopeless to begin with. Earning such a conclusion, as opposed to just arriving at one, makes a significant difference, and The Wicker Man ’73 more than earns its ending. READ MORE